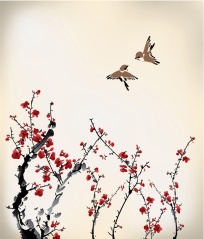 The morning of my road trip to watch James play in the OFFSA rugby tournament was overflowing with promise. I awoke before dawn, one part excitement, one part necessity—I was determined to clean the van out before I left. Our van, Old Christine, as we call her (The New Adventures of…) is faithful, but tired. She’s been very good to me, getting me all the way to work each day, and then trudging back over the hills to take me home at night, carrying teenagers and occasionally being left all night with rugby socks and cleats choking her out.

After all such loyalty, I didn’t want to chance her breaking down on the side of the road, filled with coffee cups and socks and shame.

The night before, I’d made a decision, with regard to my road trip. As you know, if you read all the blather I post here, I’d planned on rooming it up with strangers via airbnb.com

I was really stoked about that. But the night before, I was counting my pennies (well, nickels, since pennies are passé) and decided that I’d rather not spend anything more than I needed to. June is a crazy month for me—there’s ye old 18th birthday. There’s graduation and prom, there’s mortgages and gas for work and food and… well, in the end, I decided to camp out in my van for a few days.

Those closest to me offered to help, cash-wise, but I wasn’t having any of it. “I’m fierce about this,” I said. And packed up lots of blankets, a body pillow, some picnic stuff, and headed for the hiway.

It was important to me that James not know I was camping out, because I wanted him to be free to concentrate on his rugby awesomeness. I’d figured that he’d be worried, at night in his dorm room, about his gypsy momma running wild! But as it turned out, when he heard of it, he thought it was a fantastic lot of fun! 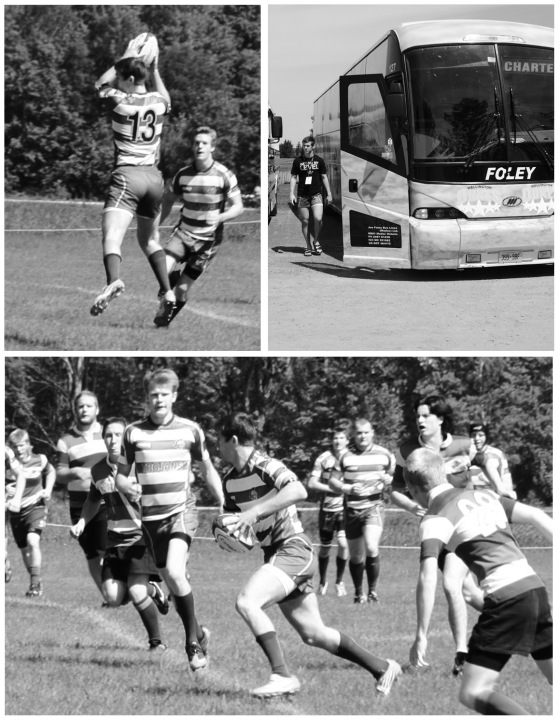 First off, the rugby game was outrageously awesome, they won and moved on to the next level. I’ll spare you a gazillion photos by giving you these three. I hadn’t known that there would only be one game on the first day, so I momentarily wondered, “what now?” before heading back on to the road.

I was delighted to find that a town close by had a ghost story, a friendly librarian, and free Wifi. I was all the more excited to find out they also had an abandoned farm! I spent a great deal of the afternoon wandering the mill and some of the houses along the river, tracing history and grieving for the young bride whose life was taken far too early.

That night, I decided to camp out in the abandoned house. James and his friends were at the Canada/Fiji rugby game and had plans for merriment at the dorm, so I knew he was good to go. I’d charged up my laptop battery and iPhone at ye olde library, sent out an iPhone “location” message to the folks back home, and was set to go.

In an attempt to obey any local and Provincial laws, I had stopped by the local police station to ask them where in their fine village, I could camp out overnight. The office was closed, so I took my chances. (Yes, I’m aware that camping out in abandoned places isn’t on the list of “Go ahead, it’s legal!”).

It took me a bit to get my bedding into the house, but excitement (yes, I know, I’m weird) was enough to carry me.
Sadly, while I was fine with raccoons and pigeons, and even mosquitoes, what I wasn’t cool with was a swarm of June bugs banging around the room. Not only that, but one room in the house was locked and I couldn’t stop wondering what was on the other side of the door. (More on that later!)

So after a bit, I rolled up my belongings and hiked back out to the van, drove to a more suitable camp site (the carpool lot!) and bunked in for the night. 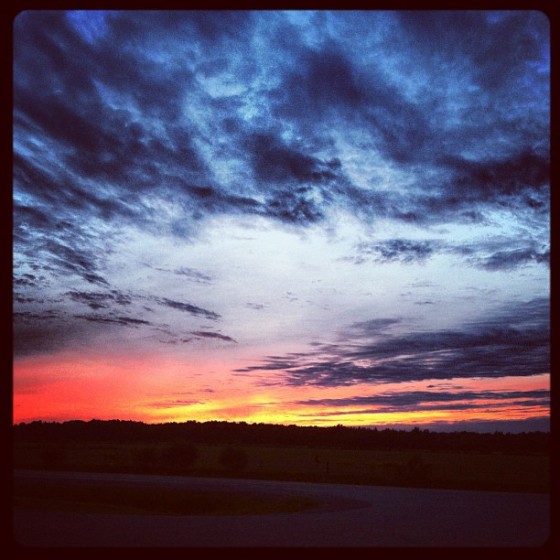 My night in the carpool lot was fairly uneventful, save for a late-night visit from a drunk, who was far more surprised, somehow, than I was, when I awoke to find him peeing against my tire. Very thankfully, it began to rain the next morning and saved me the need of a carwash!

I woke up happy and feeling free. I was all jacked up for James’ day of rugby, and, although it poured rain all through the games (severely impacting my photo opportunities!) it was awesome! You’ll get sick of me going on about how amazing it is to watch him run. But it is.

As I was traveling, I met a wonderful woman, who I’ve decided to call “Eleanor Rigby”. She was feeding some ducks in the same park as I’d spent my time in the day before. She told me stories about her childhood, how it came to be that she came to Canada, some of her adventures, and shared her reflections on life, ducks and the sweet fisherman who was fly fishing beside us. Her story was remarkable, filled with beauty, grace and adventure.
She wore delicate white gloves, carried herself with regal bearing and offered her smile without reserve. 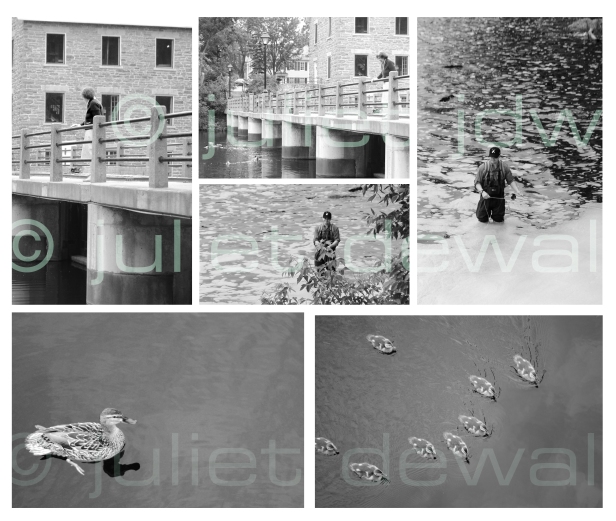 That afternoon, after my wandering and chatting with strangers, I headed to the next town over, on account of their Tim Horton’s and its free Wifi. As well, the rain was relentless, and I needed to dry my socks, not only, but James’ rugby socks (thank you, Canada). I downloaded my photos, checked my Facebook and made friends with a few other strangers I met. Among them, a little dude whose puddle-jumping left him, as well, in need of the hand dryer at Tim Horton’s, reunited with Lucy, the sweet village cat who first followed me around, then led me on great tours of the town, and a kind, homeless stranger who offered me some coffee.
I also met a young man, only a year or two older than James is. He’d spent the day mowing lawns in the rain, and came into the coffee shop soaked (another in the lineup for the dryer). As he told me about his life, I was again struck at how blessed James is and I, in return. While my son was out on the field, heading straight toward a future that beckons him with hope and opportunity, this young man struggled to keep his world steady. 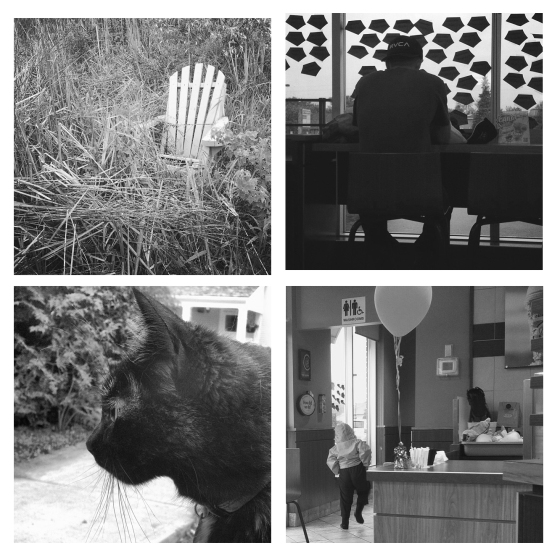 When night approached, I decided to stay at a local conservation area, rather than heading back to either the abandoned farm or the carpool/pee place. Once there, I immediately went out for a walk (rain or not!) around the forest. Mosquitoes appreciated my presence, as I provided them with a great hit of ORHnegative blood and an easy target, what with my umbrella and boots. (Note to self—next time you live in your van for a few days, check the weather first! Cold, rainy and mosquito-ey is not the best time, ever!) 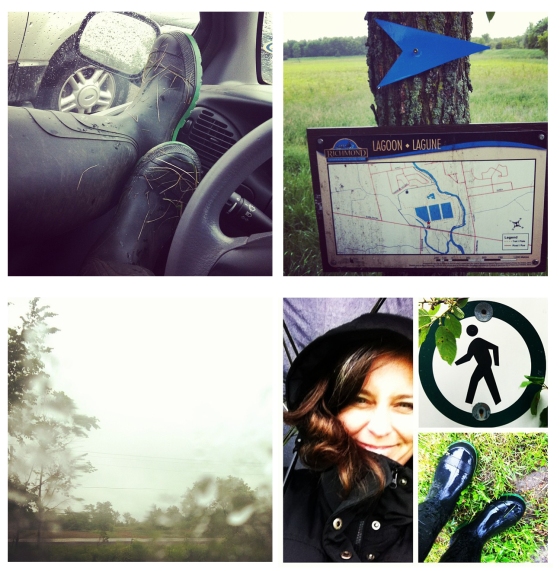 That night, I had some great visitors—a very kind local man named Al, who, I admit, I was partially worried would come back in the night to slaughter me. So much so, when he left, I sneaked out of the van, got his cigar butt and brought it inside, so that if he did slay me, there’d be DNA evidence (yes, I watch too much television!).
I also made sure to show him my giant knife. I’d taken it with me for slicing bread, but realized it was great for scaring perfectly harmless, kind old men who worried about gypsy women camped out in questionable vans.
I also met a charming older couple who brought me coffee and some dinner (talk about service!).
And, around 1am, I met a very, very kind OPP officer who assured me I could sleep in peace, as he’d drive by regularly to check on me. (I didn’t show him my knife, but I did have a thirty-second mindspin about whether or not hiding it from him equated concealing a weapon versus whether having it on the dashboard equated dangerous lunatic woman!).

In no time at all, I fell asleep to the sweet rhythms of the rain and the gentle sway of the wind. I can’t remember the last time I slept so peacefully! In the morning, it was still raining, so I headed back to Tim Horton’s to wash up, warm up and start my day.

You can read about my adventures there, HERE.

When game time came, I was so happy and excited—my trip had been spectacular, I’d gotten to meet great people, had recorded beautiful interviews with even more beautiful strangers, and was about to watch my son take home a silver medal victory! As James said, “Second in the province ain’t bad at all. So proud of my brothers. Great season and a great game at that. Can’t express how proud I am of the group of gents we had this year at Moira. An OFSAA gold in Football and a silver in Rugby is almost unheard of. I’m gonna remember you guys for the rest of my life and I’m honored to be part of the Trojan fraternity.”

Last night, he was honoured with a number of awards at the Athletic banquet, including MVP Backs for his outstanding rugby performance. Proud Momma? Damn-straight!

And so, it was time f0r me to head home. On the way, I thought I’d best check out the abandoned farm one last time, to make sure I hadn’t forgotten anything there. As it turned out, all I forgot was to take my keys out of the van before I locked the doors! So, an hour and some friendly assistance later, I was on the road again, heading home!
The good news is, in the daylight, i could see into that locked room and thus settle my imagination with the boring reality of an empty room!
I really had so much fun, I can’t imagine why I’d have ever wanted to stay in a hotel, or even with some folks. I loved my own company, and when I was bored or lonesome, I either emailed home, or I headed out to visit strangers and the homeless. (And that once, used up some free wifi Facetiming Chanel!) 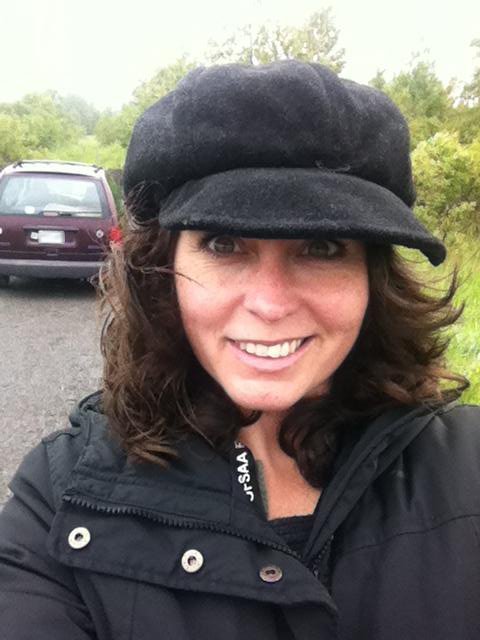 All-in-all it was an amazing adventure, filled with everything I love most about being alive!
I can’t wait for my next opportunity to travel around in Old Christine, meeting strangers, hearing their stories and chasing adventure! And while I was glad to see my bed, I’ve got to admit, I slept more soundly and happily out there listening to the rain!

Have fun everyone, and adventure on!